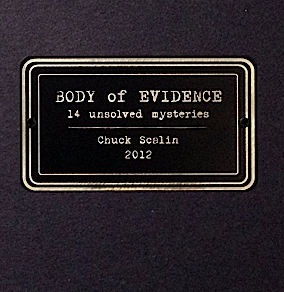 Richmond artist Chuck Scalin initially created fourteen assemblages that contain what appears to be evidence from cold cases. Scalin says they were “motivated by my interest in pop culture and the ever present crimes scene procedural television shows I’d been watching regularly for years.” To his surprise, Scalin says, “When the show opened, several people came up to me and asked how and where these boxes were found, and did I know about the crimes that may had been committed.” Given this response, and at his daughter’s urging, Scalin decided to invite a group of authors to inspect and analyze the contents of these evidence boxes and develop their own stories from the clues they discovered.

Designer Meena Khalili took these components and, in collaboration with Scalin, designed an elaborate period-inspired box that contains the photographs of the original assemblages and the stories the authors developed. The interior of each archival black clamshell box is lined with marbled papers and labeled with an etched brass plate that is hand bolted to the cover of the box. Each box is numbered individually and limited to an edition of only 100.

(Above edited from press release.)